What Causes Dark Circles Under Eyes 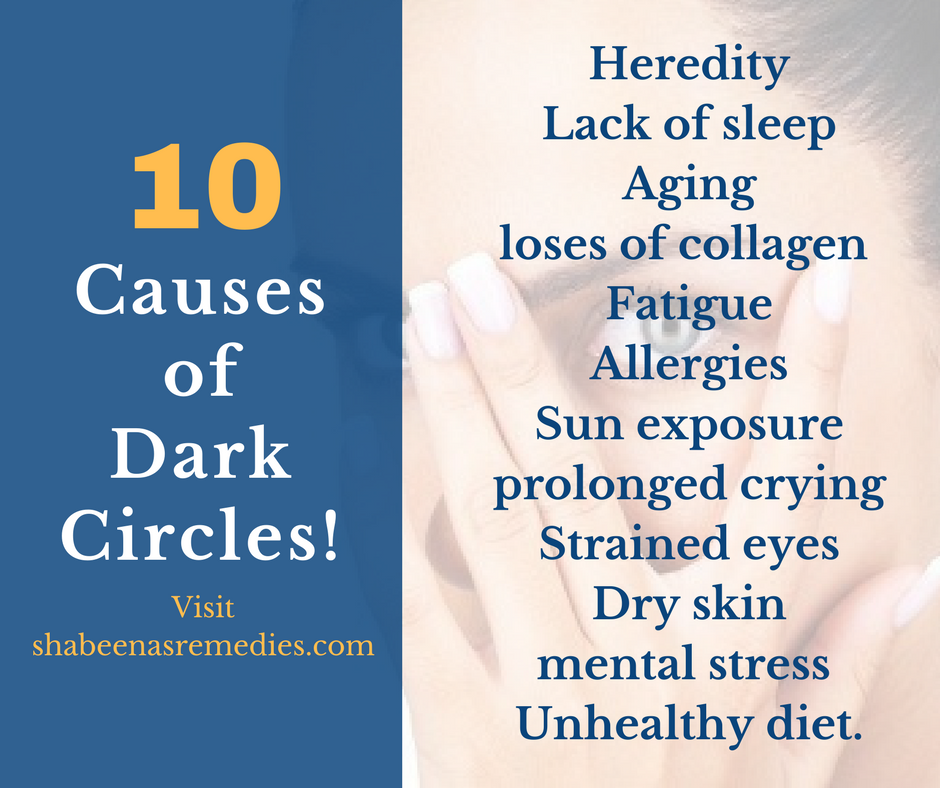 What are Dark Circles

Why do I have dark circles under eyes:

1. Are dark circles under the eyes hereditary:

The difference is that hereditary dark circles are determined by genetics, so while you can do things to make them look worse or better, you can't control whether or not you have them in the first place.There are many reasons for dark circles, but they all start with the difference in thickness of the skin around your eyes. This is called the periorbital area. In most areas of your body, the skin is between 2 and 3 millimeters (mm) thick. However, under the eyes the skin is normally 0.5 mm in thickness.
Thinner skin makes the blood vessels under your skin are more visible to the naked eye and produce a different color to your skin. Your skin and the tissue directly below the outside layer of skin, called the subcutaneous tissue, only allow blue or violet wavelengths to pass through. This results in your veins appearing blue, because only the blue light is reflected back. This reflected color is different if you have darker or whiter skin. In the former case, the veins will appear green or brown and in the latter, dark purple or dark red.
Not all circles are due to the visibility of your blood vessels beneath thin skin, though. While this is a common reason, and a higher probability if you are genetically more prone to thin skin under the eyes, it isn't the only reason.If thin skin runs in your family, a retinol or vitamin C cream helps stimulate collagen production to make skin thicker and the veins beneath less noticeable."

Dark circles under your eyes may also be triggered from the oxidation of blood leaking from the blood vessels around the eyes. The release of blood and oxidation leads to not only dark circles, but also swelling and bags under your eyes.
This condition is relatively harmless to your health, but can be a challenge to deal with. There are surgical and medical treatments available to stop the blood leaking, but it is better to start with lifestyle changes and nutritions to treat the condition and avoid other more invasive options.

4. Are dark circles due to Allergies?

Allergies results in swelling in that expands the tiny blood vessels under eyes. As a result these swollen blood vessels rub against the thin skin  of the eyes and dark color appears. Blocked nasal passages also causes dark circles. The veins from the eyes to the nose become dark and dilated.Your dark circles and swelling under the eyes, commonly called bags. When you are young, this swelling may be caused by allergic reactions, illness or an excessive buildup of fluid in your body.

5. dark circles get worse with age?

Unfortunately as we get older collagen levels decline and skin becomes thinner and less resilient allowing the blood vessels to show through.  Capillary strength also declines which is a bit of a double whammy as far as eye circles is concerned.. As you age puffiness,swelling under your eyes and dark circles seen. Tissue that is slowly losing collagen and elasticity can result in tissue sagging. This includes the fat under your eye tissue.Fat deposits around your eyes help protect them. As you age, fat may escape from the membrane, resulting in the fat falling beneath the eye, causes bagging.Plastic Surgeons and reasearchers are still working on the reason for getting bags, as we age.

6. Are Dark Circles under eyes a Vitamin deficiency ?

Inadequate antioxidants or lack of vitamins like Vitamin K, Vitamin B12 mainly causes dark circles. Vitamin deficiency is caused due to improper diet. Diet should be balanced to get rid of dark circles; you should have plenty of water, fruits, green leafy vegetables especially kale, cabbage and spinach.

An iron deficiency can cause dark under-eye circles. Because iron carries oxygen, a lack of it can mean that the cells don't get enough oxygen. This can give the cells under your eyes a dark appearance. Also, iron-deficiency anemia can make your skin look pale and ashy.

Lack of sleep is one of the many reasons why dark circles develop in the areas under the eyes. Dark circles under the eyes are not indicating illnesses which are serious. Nevertheless, if the condition of having dark eye circles is being experienced, it can affect one’s confidence

Most medical establishment doesn’t fully buy it.adrenal fatigue isn’t an accepted diagnosis, although “adrenal insufficiency” is.you might not be getting enough sleep. But dark circles crop up when stressors like fatigue, emotional stress, or dehydration (which is tough on the body) disrupt healthy circulation—and that shows through your thin under-eye skin, says Sandra Chiu, a Brooklyn acupuncturist, skin expert, and the founder of Treatment by Lanshin. If your dark circles are accompanied by a sunken, hollowed-out look, that often indicates a more serious issue with the kidneys, Chiu warns, and you should see a doctor.Slow. Down. No amount of eye cream or concealer or will help if you’re overworked, exhausted, and overwhelmed by emotional stress.

11. working for long hours in front of a computer also causes dark circles.

We have Answers for Dark Circles

We Boil Spaghetti In a Wrong Way Our Entire Life

You Eat Pineapple But You Have Probably Never Heard Of This